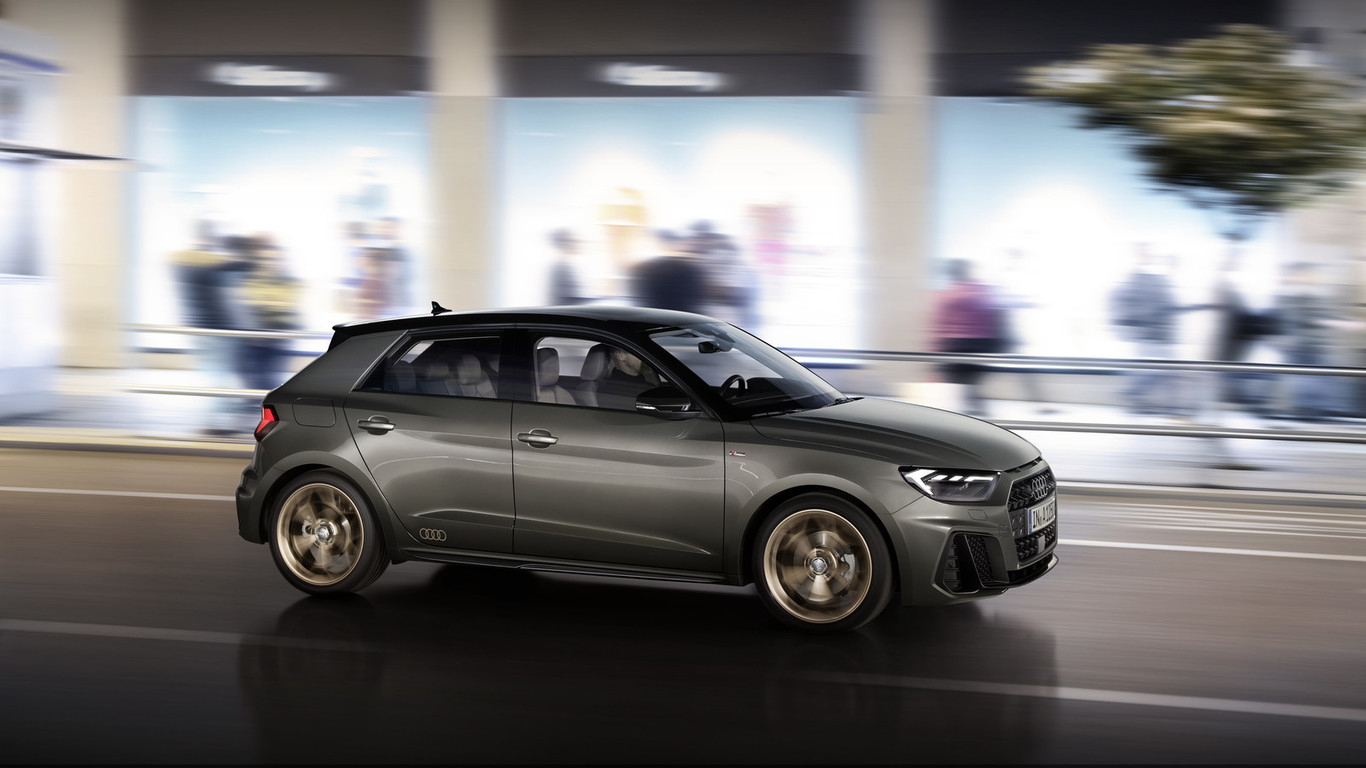 The Audi A1 Sportback 2018 picks up the witness of the first A1, the one that arrived in 2010, giving the second generation of the compact a greater technological presence and a slightly more generous length. Focused on the integration of the digital world, the new A1 represents a leap forward for the youngest of the four rings.

In the new Audi A1 Sportback we find that the singleframe grille is located in a lower plane, giving prominence to large lateral air intakes. Under the edge of the hood, three flat slits reminiscent of the iconic Audi Sport quattro of 1984. It is not the only sporting touch we see in the new A1. Wide tracks and cut-out overhangs contribute to this visual effect.

The lighting with LED technology is optional in the new Audi A1 Sportback, and segmentation of sequential lighting is also present in the rear lights.

On the side, the tilted and flat rear C-pillar is part of the same game with sportiness, which Audi does not hesitate to pair with the Audi Ur-quattro and Sport quattro of the 80s. The roof, painted in a contrasting color (optional, to choose between two possible shades) and resting on the C-pillar, visually lowers the height of the new A1, despite practically maintaining the dimensions of its predecessor. The wedge formed by its marked lateral lines also contributes to this effect.

With the S line equipment, greater air inlets and side sills are included, an elongated slit under the hood and a larger rear spoiler, in addition to a double exhaust outlet in the most powerful version.

The new A1 Sportback is available in a range of ten colors, with the option of contrasting color not only on the roof but also on the exterior mirrors, the outer lips of the front spoiler and the side sills. In addition, for the first time it is possible to combine different exterior and interior free-form terminations.

Available at the launch of the new Audi A1 Sportback, the Epic edition emphasizes the design language of this new A1 with numerous contrasts, among which are the large 18-inch wheels in bronze, white or black, depending on the tone of the car. the exterior details, the darkened LED headlights or the Audi rings on the Singleframe grille and the Audi emblem on the rear, in black.

Continue Reading: 11 Classic Mythical Cars That Come Back In Style

The most sporty interior

It is the “sportiest interior of the compact class”, according to Audi. Focused on the driver, emotional and customizable, in the words of the brand. The first thing that draws attention is how the elements are dumped in the conductor, getting an enveloping effect from the base of the design to details such as aerators, digital instrumentation or different panels.

The new Audi A1 Sportback has as an optional element with LED environmental lighting up to 30 selectable colors.

The capacity of the trunk has increased by 65 liters, reaching 335 liters with full seats, and 1,090 with the backs folded down. For its part, the height of the load edge is only 67 centimeters.

In the equipment section, as standard the Audi A1 Sportback incorporates a high resolution screen of 26 cm (10.25 inches), and multifunction steering wheel. The optional Virtual Audi cockpit offers complete information in the driver’s field of vision: from navigation guidance to dynamic maps, as well as the content of the infotainment system, as well as graphs of some of the driving assistance systems.

Also standard includes the MMI radio system, which is controlled through the multifunction buttons on the steering wheel, and the display in the digital instrumentation. As an option, the MMI Navigation Plus system offers a 25.7 cm (10.1 inch) touch screen with voice control.

Together with Audi connect, the MMI Navigation plus system offers a hybrid route guide, which calculates the route in the cloud, taking into account the total traffic status, satellite map view and new 3D city models, with up to four updates of maps per year, free of charge, in addition to Audi connect online services.

The connectivity section includes support for iOS and Android, as well as two USB interfaces (USB-A and USB-C). As an option, the Audi phone box seeks a better reception quality using LTE technology, and also recharges the smartphone by induction according to the Qi standard.

Finally, the sound system Audi sound system and the Bang & Olufsen Premium Sound System, with 11 speakers and 560 W, set the top of the range with a 3D sound design that uses the windshield as a reflective surface.

As for the suspension, Audi announces torsional axle for the rear train, with a harder configuration as optional sports element. In the wheels we will find tires that go from 15 to 18 inches. For its part, Audi drive select comprises four driving modes.

The dynamic packages, individually configured for each version, combine equipment options to give the Audi A1 Sportback 2018 a more sporty finish. For the petrol engine access variants it includes the sport suspension, red brake calipers and larger brake discs.

In all other versions, the Dynamic Performance Package includes brake calipers finished in red and larger disc brakes, as well as adjustable damping, Audi drive select and actuator for exhaust sound.

The Audi A1 Sportback 2018 is available from this summer, and will be launched on the market in the fall.